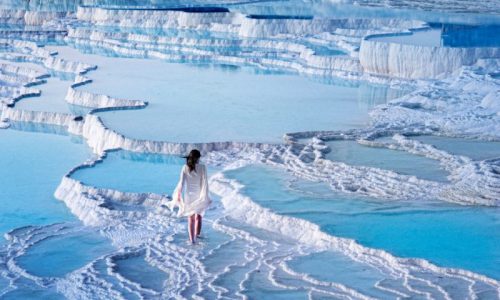 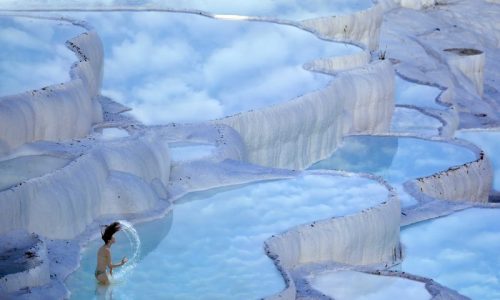 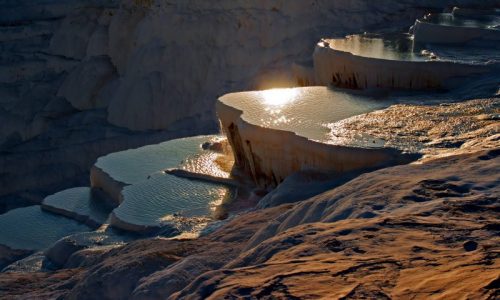 Guided Pamukkale tour from Fethiye, and also to the Hierapolis consolidates no less than three sections – going to the remains of the Roman old city of Hierapolis. There is a stroll at the mountain’s corner secured with the travertine stores and swimming in the Pool of Cleopatra. The primitive buildings on the site of the Hierapolis showed up in the second thousand years BC. Another city was constructed on the site and called it Hierapolis by the ‘Lord of Bergama Attalus II in 190 BC’. This beautiful city was later smashed by a seismic tremor and reconstructed. Then it went under the security of Rome. Strolling through the remnants of Hierapolis includes going by walking to the biggest antiquated Roman necropolis in Turkey.  This name Hierapolis is referred as the “blessed city” according to the Greek language. Overcoming around two kilometers tourists may see an assortment of tombs and sarcophagi some of them were very much saved and some were skillfully reestablished. Furthermore, the journey incorporates a visit to various all around saved locales of the antiquated city – a complex of showers, Roman and Byzantine entryways, and items that were recreated by archeologists – toilets, the vestiges of the wellsprings and the metropolitan Theater. In 1988 the city was proclaimed a UNESCO World Heritage Site.

Meander, what things to do in the Pamukkale tour from Fethiye? Pamukkale tour from Fethiye is incomprehensible without strolling in favor of a mountain secured with stores of calcium – it is a standout amongst the most celebrated Pamukkale attractions. Tourists take their shoes off and get down gradually along the tricky incline of blanketed mountains that was made by travertine. This is a one of a kind spot on the planet where you can see normal falls through which mineral-rich water channels framing lakes isolated by limestone hindrances. A great many years the streaming water dissipating of the ground shaped an odd travertine that appears to be the snow-white castle. By the way, Pamukkale signifies “cotton mansion” in Turkish. The Pamukkale tour from Fethiye offers some leisure time so genuine beats of antiquarianism or history may go out for a stroll along the mountainside to investigate the vestiges of the Roman old city of Hierapolis. Great Christians can move up to the holy place and Basilica of St. Philip who was executed and covered there. Others can appreciate the mineral waters of the antiquated Pool of Cleopatra. Cleopatra’s Pool has misleadingly framed lake. There are sections and architraves of the colonnade that encompassed the expanding on every one of the four sides and was pulverized by a tremor in the seventh century AD. Mineral water in the supply has a temperature of the human body – 35-36 C degrees and improved with calcium. It has an astonishing renewing and reviving properties. Pamukkale warm pools cures ailment, rickets, cardiovascular, neurological, skin and gastrointestinal sicknesses, lumbago, psoriasis and dermatitis. The separation secured while going for a Pamukkale tour from Fethiye is 230 km around. You will never lament going by Hierapolis and Pamukkale tour from Fethiye.

Pamukkale is a mainstream tourist spot in a great many people’s trek to Turkey. This day tour beginning and consummation in Fethiye gives you an immediate way to entryway administration to get to and from the site so you can visit the colossal fascination. It is the ideal approach to appreciating Pamukkale tour from Fethiye, it is regularly called the ‘cotton manors’ furthermore get the chance to visit the Ancient City of Hierapolis all in one day. This is a way to entryway benefit that will lift you up and drop you back to any area in the encompassing Fethiye locale. It leaves each day all through pinnacle season and we likewise run a semi way to the entryway in off pinnacle season.

The day will give you a completely guided Pamukkale tour from Fethiye, frequently alluded to as the Cotton Cliffs. You will get the chance to stroll along the white porches of Pamukkale while adapting more about them. You will then move onto the antiquated city and UNESCO World Heritage recorded the site of Hierapolis. Here you will be guided through the numerous captivating angles that make up the remains and you will likewise get the opportunity to visit the great amphitheater.

Spots to visit amid Pamukkale tour from Fethiye:

Pamukkale regularly alluded to as the “Cotton Castle”, is comprised of cotton looking white travertine patios that originate from the carbonate minerals of the streaming water. With recuperating afflictions to the water, individuals have come since antiquated times to mend their sicknesses at the notable spa town. The astonishing white calcite bluff of Pamukkale framed from calcium stores left by the territory’s hot springs. Similarly, that stalactites structure inside limestone gives in, the stones develop on the lofty slants and bit by bit fan out to frame regular porches. The blinding white shade of these travertines does resemble an odd characteristic post of sorts. You can walk shoeless just, from the base of the calcite mountain up the whole bluff edge. The patios at the upper levels hold pools of water where you can sit in.

The Antique Pool of Pamukkale

When you need to partake in remarkable healthy heated pool splashing just like the Italians did, then look no more distant than here. ‘Pamukkale’s Antique Pool’ which is located near the ‘temple of Apollo’ permits you the possibility to ease out from your weakened body due to hectic travel by enjoying in the hot spring waters which are rich in minerals and also that are at consistent temperature. It is conceivably one of the most well-known hot spring with half-submerged segments and pieces of fallen marble scattered in the water.

Spots to visit in Hierapolis:

Hierapolis is an antiquated settlement that has been gone back to similarly as 190 B.C. It is said to have been worked by the general population of Pergamum and to have been utilized as a spa town for the waters in the range giving recuperating forces of individuals’ illnesses. Hierapolis turned into a noteworthy Roman City of the Roman Empire and numerous rulers were said to go here to utilize the spa offices. It has been populated by any semblance of Romans, Greeks, and Lycian individuals.

On an incline over whatever is left of the Hierapolis, vestiges are the relentless theater with its veneer more than 100 m long and fusing two levels of seating, each with 26 lines. Worked amid the rules of the Italian kings, and this theater is unimaginably very much safeguarded. It has held a lot of its unique point of interest with the royal boxes (where VIP visitors would have viewed the amusement), and some enhancing boards along the stage as yet surviving.

Devoted to Hieropolis, this phenomenal gallery is set inside the previous Roman bathhouse. Displays showcase a portion of the delightful aesthetics of this once essential city, with exquisite reliefs, sarcophagi, and statuary. There are likewise displays from close-by Afrodisias.

Booking your trek is inconceivably simple, as this spot can be gone to in only a day and unquestionably not to be missed! To guarantee full fulfillment, please let us know of you helpful date and time with the goal that we will organize your trek on understanding to yours or your family’s solace.