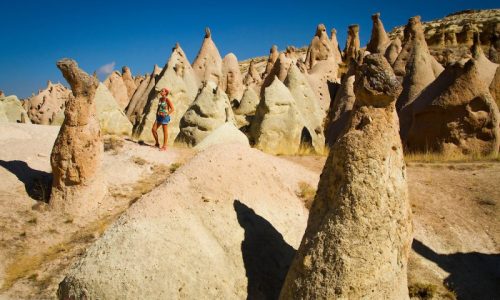 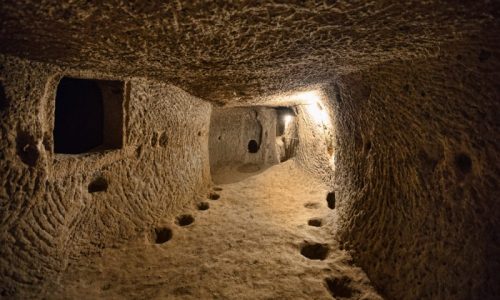 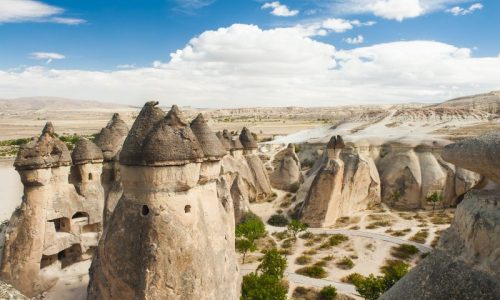 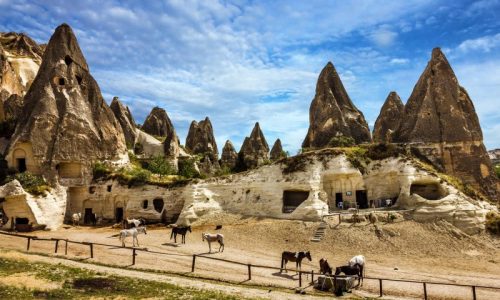 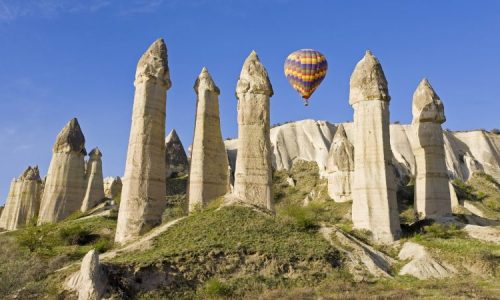 We will be picking you up from your Istanbul hotel at around 5 a.m. to airport where your flight from Istanbul to Cappadocia will be waiting for you. It will be an hour flight. On landing at Cappadocia, our driver will take you to the Cave hotel that we would have already reserved for you. Then at 9 a.m. we will pick you for your Cappadocia Green Tour.

The first day of this 2 day Cappadocia tour from Istanbul will take you to the several landmarks of the Southern Cappadocia that includes are as follows:

While watching the fairy chimneys here, you will be given detailed information about the history and formation of Cappadocia.

The first time it was used by the late Romans as a shelter from possible Arabian invasions and then local people used it as a natural deep freeze.

Next in line in our 2 day Cappadocia tour from Istanbul includes the Ihlara valley. It was formed by the volcanic actions of Mt. Melendiz and Mt Hasan in the distinct province Aksaray.

Afterwards we will be amusing our taste buds with 1 hour lunch.

The monastery gives a look of a castle but in fact, its chapels, churches, bedrooms, big cathedral, and storage prove it to be a monastery.

Pigeons have always been important for the people of Cappadocia. Their eggs as well as droppings were used for several purposes.

The Onyx factory will bring our first day to an end at around 5 p.m. Onyx is a semi precious volcanic stone with various colors and has several materials in it.

The second day of 2 day Cappadocia tour from Istanbul will begin when we will pick you at 4 a.m. for Cappadocia hot air balloon. It will be an hour flight. Just before the sunrise our qualified pilot will check the weather, landing area and final safety measures and once he would consider it appropriate, he will brief you about your safety measures during the flight and then you will start flying. After an hour’s flight you will land. You will be awarded with the flight certificate to cherish the memories at their best.

We will return to hotel then and again at 9 a.m. we will pick you for Cappadocia red tour and will move according to the following map:

Uchisar Castle: The castle has been built on the highest point in the region. The castle is unique as it includes the graves, churches and tunnels that you are not going to see anywhere else around the world.

This attractive museum needs to be visited in order to understand the influence of the religion, specifically influence of Christianity, in the region. It is one of the tourists attracted sites with cave churches adorned with carved frescoes by the Orthodox monks somewhere between 900 and 1200 AD.

The village has been deserted because the area is known to be plagued by the rock falls. Here you can enjoy exploring the Church of John the Baptist. It is known to date back to 5th to 6th centuries.

This is the sight to see three head fairy chimneys. Then we will have an hour lunch.

It has been since Hittites 2000 BC that people get the red clays from around the Kızılırmak River (the longest river in Turkey) and white clay from volcanic hills. They use the clay to make jars and pots for their day to day usage.

These fairy chimneys have conical shaped body along with a boulder on top of it. This cap is made up of harder and more resistant rocks like ignimbrite and lahar, while the cone has been made up of volcanic ash and tufa.

The 2 day Cappadocia tour will end with the visit to the carpet factory. Each carpet resembles a collection of symbols, beliefs and messages. Each pattern depicts certain feeling, a wish or a desire. These carpets are known to be representing a living history from early ages to date.

During both days of 2 day Cappadocia tour from Istanbul; we will have lunch at Turkish restaurant. We will start with the soup and salad followed by one dish that you will be choosing from the main dish list. The lunch will be served with the seasonal fruits. It will be appropriate for the vegetarians.